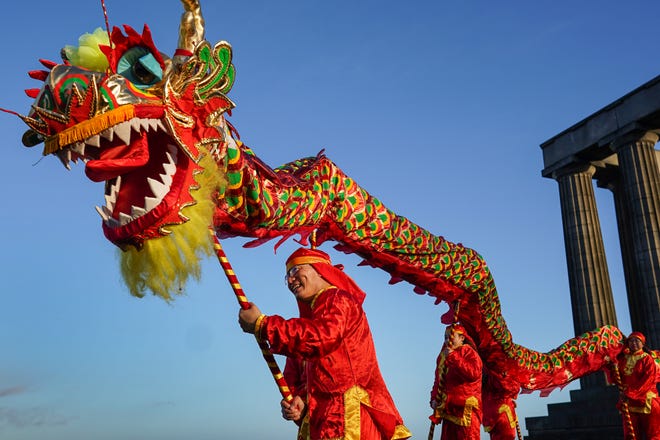 On Friday, February 12, over two weeks of festivities will begin for the Chinese New Year. Also called the Spring Festival or Lunar New Year, this celebration is full of dances, fireworks, family gatherings, gifts, and special dishes. The 16-day Chinese New Year is celebrated by over 20% of the world and is the most important Chinese holiday.

The Spring Festival began as a day to pray to gods and ancestors for good planting and harvest seasons. There are many myths about the first festival, but one of the most popular is the story of a brave young boy who defeated the monster Nian with firecrackers, leading to firecrackers being part of the Spring Festival celebration. Firecrackers are now thought to ward off monsters and bad luck, and the most fireworks in the world are set off on the night of the New Year.

Red is the color of Chinese New Year — families decorate their homes in red lanterns, paper, and chili peppers (both real and fake). Intricate paper cuttings are especially prominent for this holiday. Many people will buy new red clothing for the festival, as new clothes symbolize a fresh start and good luck. Style during Chinese New Year today is a combination of traditional clothing and modern elements, with most garments being expectedly red. Major companies such as Nike and Adidas have even started selling Chinese-New-Year-themed shoes. Children also receive red envelopes full of money, reflecting the color’s symbolism of good fortune.

The Spring Festival has a variety of dishes associated with it, some of them differing regionally. Spring rolls are incredibly popular in Southern China and are often eaten specifically on the first day of Spring. In the North, dumplings are the major dish of the New Year. Some families will also put a coin into one dumpling, and good luck will come to whoever eats it. Long noodles (symbolizing longevity) are also a staple, paired with many different meats and vegetables. Steamed fish is one of the most popular noodle pairings, as it symbolizes surplus and wealth. In the providence Hunan, it is custom to add red peppers to the fish. For dessert, nian gao, or rice cakes, are made in varying styles across regions, including sweet, savory, and deep-fried.

One of the most well-known aspects of Chinese New Year is the Chinese zodiac. 2020 was the Year of the Rat, and the Spring Festival will be the beginning of the Year of the Ox. People born in the Year of the Ox are hard workers, intelligent, and reliable. Your zodiac year is also to be your year of bad luck, but you can defend yourself by wearing the color red.

Different days of the Spring Festival have different activities, food, and ceremonies. February 18, for example, is the Day of the Human; it is the day humans were created by the goddess Nüwa of Chinese mythology. February 22 is Son-in-Law Day, on which fathers will have dinner with their daughters and sons-in-law. Chinese New Year concludes on February 26 with the Lantern Festival, during which waves of lanterns will provide the backdrop for parties and celebration.

With all its history and traditions, the Chinese New Year is always an exciting holiday to be a part of. It’s no wonder that this incredible festival is celebrated by so many all over the world.