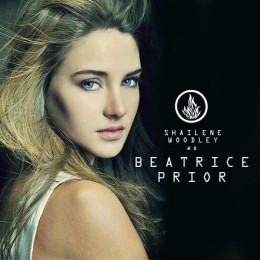 Shailene Woodley- actress for Beatrice (Tris) Prior from Divergent

What would you do if you were trapped in a society that tried to force you to conform to a certain persona? Give in? Try not to create waves? Or would you stand out?

The exciting movie Divergent is based off a book by the same name written by Veronica Roth. In the story, there is a dystopian society divided into factions based off a particular character trait. For example, the Dauntless value bravery, the Erudite, knowledge, and the Abnegation, selflessness.

Tris Prior is the protagonist of the novel, and is torn between the three aforementioned factions. There are a total of five factions, and each teen her age takes a test to determine where he or she belongs. However, Tris is special; she fits into not one, but three different factions.

As you might suspect, she comes into conflict with many of the leaders who want to control the people. If you don’t fit into the system, then you are a threat. And threats face quite unhappy ends. Therefore, not only does Tris have to try to find her own way in the world, but she also has to constantly be aware. She can trust no one in a society where it seems everyone wants to kill her.

The movie is full of action and suspense and follows the plot of the book fairly closely. Small details have been changed or subtracted from the film, but mostly for the sake of clarity or to keep it a reasonable length.

The casting was spectacular- Shailene Woodley as Tris, and Theo James as Four, her trainer in Dauntless. Both actors perfectly embody their characters, and they continue the very dramatic atmosphere throughout the whole movie. Ms. Woodley was a particularly great choice for the female lead as she captures many of the struggles Tris faced. She appears innocent, like a young girl lost in the world. But at the same time, she is a tough fighter who never gives up.

Divergent feels like a journey as you follow Tris through the dangerous, factioned world. She is too old now to hide, and being “divergent” (fitting more than one faction) has brought her troubles. But along the way, she makes surprising friends who help her fight for what is right. At the same time though, some of the people closest to her will betray her or be killed.

If you are looking for an action-packed film to keep you on the edge of your seat, then be sure to watch Divergent today!